On May 28th, the Tokyo District Court dismissed a claim by Bloomberg L.P. that it had no employment contract with a reporter who was laid off after he failed to meet Performance Improvement Plan (PIP).

Bloomberg claimed that the reporter refused its offer to have him work in the warehouse and to negotiate the terms of his reinstatement.

The Tokyo District Court ruled that the reporter had no obligation to respond to Bloomberg’s reinstatement proposal. The court said the reporter is free to decide whether to accept the warehouse job. The court further stated that the company’s grounds for dismissal had no objective reasoning, and therefore it was invalid.

The verdict was expected considering the dismissal was legally invalid. We demand that Bloomberg now abandon appeals to the higher court and reinstate the reporter.

The incumbent Abe government aims to further deregulate labor laws and even destroy labor regulations by introducing overtime pay exemption and liberalizing the scope of temporary staffing. Next year, it also aims to introduce a system to resolve labor disputes by monetary compensation, where corporations only need to pay money to workers being dismissed even in cases of illegal dismissal. Bloomberg’s lawyer, Kazuki Okada, presented his support for this system at the government’s Industrial Competitiveness Council.

Foreign companies such as Bloomberg and IBM have dismissed many workers in Japan claiming their “incompetence.” In many cases, the dismissals violate article 16 of Japan’s Labor Contract Law, and are invalid. However, businesses operating in Japan often ignore this law. Instead of penalizing such malpractice, the government is trying to rewrite the law to fit the needs of these businesses.

Japan needs to strengthen labor regulations to protect its workers and reintroduce secure employment rather than reducing their rights by deregulating labor laws.
We demand that Bloomberg obey Japanese labor laws. We are committed to seizing further disturbances of work regulations, which would legalize unfair dismissals. 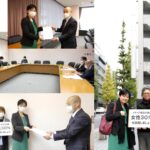